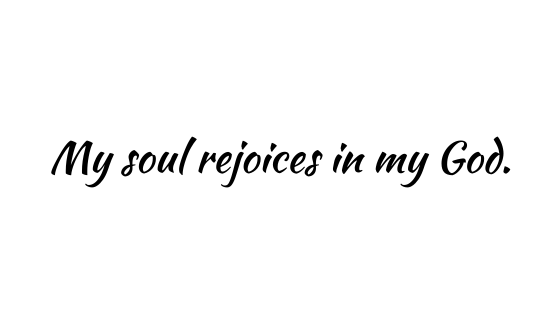 The responsorial psalm for this third week of Advent comes from the Magnificat, Mary’s famous canticle in which she proclaims the greatness of God with her whole being.

My soul proclaims the greatness of the Lord; my spirit rejoices in God my Savior,

The terms “soul” (phychē) and “spirit” (pneúma) should not be understood as different parts of the human person, as is the case in modern psychology. Nor should they be seen as opposed to body (sōma) or flesh (sarx).

Rather, each term describes the whole person as viewed from a particular perspective:

Here, Mary’s soul and spirit are praising God for what is being done in her very being.

for he has looked upon his lowly servant.

Like Hannah before her (1 Samuel 1:11), Mary rejoices in the fact that her lowliness is not an obstacle to God’s plan. Rather, it is actually evidence that the poor and downtrodden have been visited with salvation. She who is lowly will be called blessed, not because of her own piety but because of God’s goodness. Her being blessed is not to be seen in God’s blessing her with a child (like Leah in Genesis 30:13), but in the fact that, with her consent, a child will be born through whom all people will be blessed (Judith 13:18).

From this day all generations will call me blessed.

The humility that acknowledged her lowliness does not deny the greatness of the things that will be accomplished through her. On the contrary, the more magnificent the things accomplished, the clearer will God’s power and might be seen, for only God could bring about such wonders. Thus, as mary rejoices in her own blessedness, she is really claiming God’s goodness and power.

The Almighty has done great things for me, and holy is his Name.

Mary extols the holiness of God’s name, which is another way of saying that God is holy. She is praising God for having singled out the lowly and for having reversed their fortunes.

He has mercy on those who fear him in every generation.

This is the way God has acted from age to age, offering mercy to those who are open to it, to those who stand in awe of God’s greatness. Mary sees this mercy taking shape in her life in a new and wondrous way, and so she glorifies God for it.

He has filled the hungry with good things, and the rich he has sent away empty.

These last verses list some of the past blessings enjoyed by Israel. First is the reversal of fortune that has happened so often in the past: the hungry are filled while the rich are sent away empty.

He has come to the help of his servant Israel for he has remembered his promise of mercy.

The reference to the promises made to Abraham places all of God’s blessings within the context of the covenant associated with this prominent ancestor (Genesis 15:1-21, 17:1-14).

These promises included a pledge that they would be a great nation, that they would be given a land of their own, and that they would live prosperous and peaceful lives secure from outside threats. The history of Israel is an account of the people’s infidelity to their responsibilities and God’s mercy in the face of their failures.

Mary’s hymn of praise suggests that the marvels accomplished in her are a final example of God’s mercy. The salvation of the people has finally come.