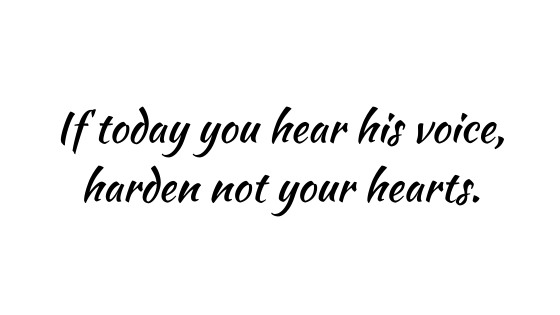 This week’s responsorial psalm comes from Psalm 95, which regularly opens the Church’s official prayer, the Liturgy of the Hours. It combines an invitation to praise, a plea for openness, and word from God.

The latter half of this psalm (verses 7-11) is quoted by the author of Hebrews as a warning against the danger of growing weary and giving up the journey of faith (Hebrews 3:7-11).

Come, let us sing joyfully to the LORD;

The invitation to praise God will be presented three times, in varying formats. Together they seem to be a reenactment of a liturgical movement.

“Let us sing joyfully to the LORD” is the initial summons.

let us acclaim the rock of our salvation.

The relationship that exists between God and the people is characterized by means of several metaphors, the first of which is God as the “rock of their salvation.” A rock is solid and secure. It affords grounding for whatever relies on it. Natural formations of rock also provide refuge and shelter from inclement weather and various dangers. It is an apt image to refer to God as the protector of the people.

Let us come into his presence with thanksgiving; let us joyfully sing psalms to him.

The second invitation to praise is an invitation to enter the presence of God, which is presumably the temple. The repeated invitation to come might indicate that this was a pilgrimage psalm, although its main theme, contemplation of God as King, can apply to any situation.

Come, let us bow down in worship;

The third invitation to praise is to bow down in worship of the LORD.

let us kneel before the LORD who made us.

In addition to being the “rock of salvation,” God is also clearly identified as Creator. This can be a reference to God as the Creator of the universe and everything within it, or it can be a more personal reference to the fashioning of a disparate group of individuals into a coherent community. The image that follows suggests the latter interpretation.

For he is our God, and we are the people he shepherds, the flock he guides.

The psalmist identifies the community as the flock and God as the shepherd. In a pastoral community, such a relationship was quite intimate. Shepherds took total responsibility for their sheep, caring for them and protecting them even at the risk of their own lives. For reasons such as this, “shepherd” became a fitting metaphor to describe the monarch, who was expected to act in this same way on behalf of the people of the realm.

In this psalm, the images of rock and shepherd illustrate the people’s perception of God as protector.

Oh, that today you would hear his voice:

Having depicted God as a caring and devoted protector, the psalmist turns again to the people and issues a serious plea that they be open to the voice of God.

This plea suggests that “today” the people who have been gathered together will hear God’s voice. Since this gathering is clearly liturgical in character, it is safe to conclude that the word from God will be a part of the actual liturgical celebration. The people have come to worship God and to receive some word from God that will comfort them or set a direction for their lives.

“Harden not your hearts as at Meribah, as in the day of Massah in the desert,
Where your fathers tempted me; they tested me though they had seen my works.”

God addresses the reverent community, warning the people to avoid repeating the rebellion of their ancestors in the wilderness (Exodus 17:1-7, Deuteronomy 6:16).

Tempting God or putting him to the test means testing his goodness and fidelity by forcing him to act, as if his previous deeds weren’t enough proof of his love for us. The previous generation did this by demanding signs that would prove the presence and power of God acting on their behalf, despite the fact that they had witnessed God’s gracious deliverance of them from Egyptian bondage.

God desires hearts that are open, not hearts that have been hardened by selfishness or lack of faith. “Today” the descendants of those rebellious wanderers are called upon to respond with open faith and willing obedience.