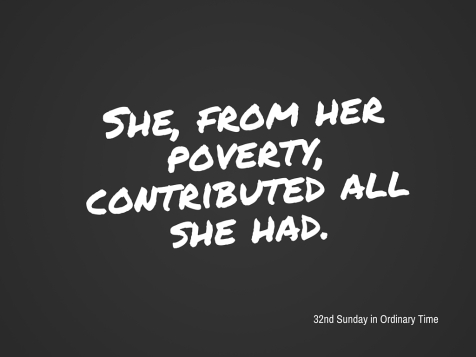 In those days, Elijah the prophet went to Zarephath.
As he arrived at the entrance of the city,
a widow was gathering sticks there; he called out to her,
“Please bring me a small cupful of water to drink.”
She left to get it, and he called out after her,
“Please bring along a bit of bread.”
She answered, “As the LORD, your God, lives,
I have nothing baked; there is only a handful of flour in my jar
and a little oil in my jug.
Just now I was collecting a couple of sticks,
to go in and prepare something for myself and my son;
when we have eaten it, we shall die.”
Elijah said to her, “Do not be afraid.
Go and do as you propose.
But first make me a little cake and bring it to me.
Then you can prepare something for yourself and your son.
For the LORD, the God of Israel, says,
‘The jar of flour shall not go empty,
nor the jug of oil run dry,
until the day when the LORD sends rain upon the earth.’”
She left and did as Elijah had said.
She was able to eat for a year, and he and her son as well;
the jar of flour did not go empty,
nor the jug of oil run dry,
as the LORD had foretold through Elijah.

1 Kings and 2 Kings were originally a single work. It consists of material from various historical sources, such as the “book of the acts of Solomon” (1 Kings 11:41) and the “book of the chronicles of the kings of Israel” (1 Kings 14:19), which were forged together by an editor who is focused on fidelity to Yahweh. Hebrew tradition holds that this editor was the prophet Jeremiah.

Today’s reading is a prediction-fulfillment story featuring Elijah, who was a prophet during the reign of King Ahab, who ruled over the northern kingdom of Israel from 869-850 BC.

The author of 1 Kings tells us that Ahab was not a good king:

“Ahab, son of Omri, did what was evil in the Lord’s sight more than any of his predecessors. It was not enough for him to follow the sins of Jeroboam, son of Nebat. He even married Jezebel, daughter of Ethbaal, king of the Sidonians, and began to serve Baal, and worship him. Ahab set up an altar to Baal in the house of Baal which he built in Samaria, and also made a sacred pole. Ahab did more to provoke the Lord, the God of Israel, to anger than any of the kings of Israel before him” (1 Kings 16:30-33).