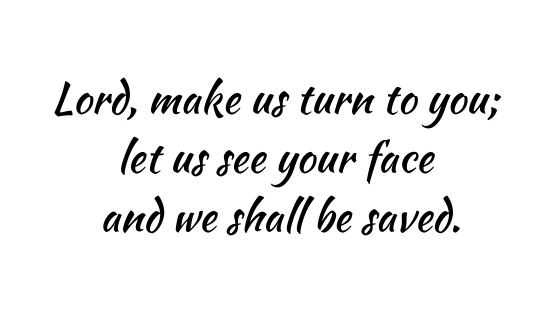 The responsorial psalm for this first week of Advent comes from Psalm 80, a community lament in a time of military defeat. In it, the psalmist pleads for God’s protection and tender care.

Several images for God are employed, the first being that of an attentive shepherd. A shepherd spent so much time with his flock that a good shepherd could recognize the individual bleating sounds of the various sheep, thus allowing him to be conscious of their whereabouts even when they were out of his sight.

This is why the psalmist cries out “Hearken!” He is confident that God will hear the plea, recognize the voice, and immediately come to their aid.

from your throne upon the cherubim, shine forth.

The second image for God: an imperial ruler, majestically enthroned.

Cherubim are winged angelic beings with both human and animal characteristics. They are typically employed as guards for what belongs to God: in the Garden of Eden (Genesis 3:24), on the ark of the covenant (Exodus 25:20), and here, around God’s throne.

Rouse your power, and come to save us.

The psalmist pleads to God, the powerful ruler, for rescue.

Once again, O LORD of hosts,

“Hosts” is a military term meaning “divisions of the army.” The heavenly hosts fight cosmic battles with God as their captain.

Israel believed that whenever necessary, God would marshal these forces of heaven and fight in Israel’s defense (Isaiah 40:26)

look down from heaven, and see;

The psalmist acknowledges that the divine “LORD of hosts” is also the majestic ruler who sat atop the heavenly throne, and so he cries out for God’s attention to his plight.

take care of this vine,

Cultivating a vineyard is demanding and tedious work; it takes a long time to bring a vine to maturity. Like shepherds, vinekeepers must be exceedingly dedicated and patient. Both are stewards of living things that follow their own laws of growth, laws over which the caretakers cannot really control. They must forego their own comfort in the face of long hours and inclement weather.

Picturing God in this way, the psalmist cries: “Take care of this vine!”

Note the beautiful composite of images the psalm has sketched to characterize the relationship between God and the people. Though God is very powerful, like an imperial ruler or military leader, the care that he provides compares to that of an attentive shepherd or a patient vinekeeper.

The final plea mentions one who sits at God’s right hand, traditionally considered the place of honor. This may have originally been a reference to Israel as the instrument through which the power of God manifests itself, or perhaps it refers to the Davidic king of Israel, the one who was responsible for the safety and prosperity of the nation. Gradually, it was applied to the longed-for royal messiah.

Then we will no more withdraw from you; give us new life, and we will call upon your name.

The stability and constancy of the people are entirely owing to the grace and strength provided by God. Secure and cared for, the people will have new life, will call upon God in times of need, and will not waver.