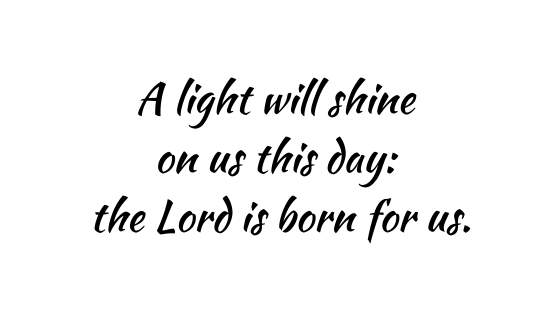 The responsorial psalm for Christmas Mass at Dawn comes from Psalm 97, an enthronement psalm that praises God as king over all.

The LORD is king;

The psalm opens with the traditional enthronement declaration: “The LORD is king!”

let the earth rejoice; let the many isles be glad.

This is appropriately followed by the exclamation: “Rejoice, and be glad!” This response suggests that the manner of God’s rule calls for celebration, and this celebration extends beyond the confines of Israel to the entire world.

The heavens proclaim his justice, and all peoples see his glory.

The heavens join in praise of God’s magnificent rule, which is perceived not only by Israel, but by all peoples.

Unlike other regimes built merely on brute force or military victory, both of which might fail and result in the dethronement of the former victor, God’s rule is constructed in the permanence of creation, in cosmic justice and right order.

Not only is it impregnable, it is also immutable. It stands secure, enabling God to govern undisturbed by any threat and assuring reliable protection to all those under God’s jurisdiction.

Light dawns for the just; and gladness, for the upright of heart.

Just as the cosmic forces of good are frequently characterized as light, so the good fortune that flows from upright living is associated with light. The just do not languish in darkness; they flourish in the light, and in this their hearts are glad.

Be glad in the LORD, you just, and give thanks to his holy name.

The passage concludes with an exhortation to be glad and give thanks. These are fitting responses to the graciousness of God within which the righteous have been blessed.

God’s magnificence challenges all to live righteously in accord with the righteousness of God that has been manifested.