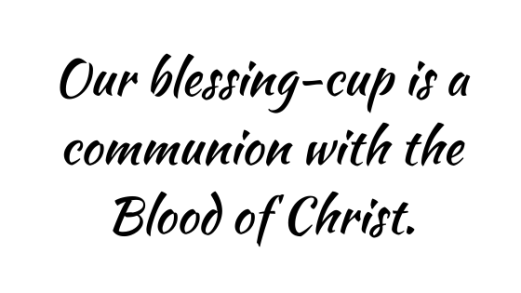 The responsorial psalm for this week is from Psalm 116, a hymn from a temple service of thanksgiving. (It appears as Psalm 114 in the Greek and Latin Bibles.)

This psalm used to be part of the old Roman liturgy of the Eucharist. Before Holy Communion, the priest would pray verses 12-14, to indicate that the best way to “pay” our debt to the Lord is to join in the sacrifice of Christ.

The Church recommends this psalm for all the faithful as a preparation for Mass.

How shall I make a return to the LORD for all the good he has done for me?

The passage opens with an acknowledgment of the psalmist’s indebtedness to God. No deed or gift will even begin to compare with the divine favors he has received.

The cup of salvation I will take up, and I will call upon the name of the LORD.

Inadequate as it is, the psalmist resolves to repay God by an act of worship. He will lift up the cup of salvation and call on the name of the Lord.

It’s not clear exactly what the cup of salvation is, as this is the only place where this expression occurs. It may be a reference to a ritual libation of wine and oil (Exodus 29:40-41, Leviticus 6:14), poured out as a thanksgiving for being rescued from death.

Or it could be a festive drink, the wine that was shared at a sacred meal, a symbol of the joy that God’s graciousness has produced. Whatever its identity, it serves as a cup of joy for having been saved.

Christians interpret this as a prophecy of Christ’s precious Blood that he gave his disciples at the Last Supper or the “cup of suffering” Jesus spoke of in his prayer to the Father at Gethsemane.

Precious in the eyes of the LORD is the death of his faithful ones.

For God, the death of those who fear him (i.e., the righteous, hāsîdîm) is a matter of significance, because it is he who watches over their lives. The psalmist sees himself as one of the God-fearing, the “saints.”

The idea that the death of a righteous person would be precious to God conflicts with the traditional understanding of retribution, which suggests that the faithful should not be afflicted and the righteous should not have to face a wretched death.

“Who gave you the cup of salvation, so that by taking it and calling on the name of the Lord, you might repay him for all that he has given to you? Who, if not the one who says: Can you drink the cup of which I must drink? Who has bidden you to imitate his sufferings if not He who has already suffered for you? Moreover, precious in the eyes of the Lord is the death of his holy ones. He paid the price with his blood, which he poured out for the salvation of his servants, so that they would not hesitate to give their lives for the name of the Lord” (Saint Augustine, Enarrationes in Psalmos, 115.5).

The relationship between the psalmist and God is strikingly characterized with a metaphor of a slave born into a household (“son of your handmaid”). Such a person had neither a justified claim to, nor any guaranteed likelihood of, emancipation. Like a slave with no hope of release, the psalmist was bound to a life of great difficulty.

By using these legal metaphors to characterize his relationship with God, he is dramatizing his own situation.

you have loosed my bonds.

Despite his condition, God looked kindly upon him and loosed him from his servitude.

To you will I offer sacrifice of thanksgiving, and I will call upon the name of the LORD.

The “sacrifice of thanksgiving” mirrors the earlier lifting up of the cup of salvation. This thanksgiving (tôdâ) is a public acclamation of God’s saving action.

The name of God, which is a manifestation of the very essence of God, is called on in the song of thanksgiving, proclaiming before all God’s salvific presence.

My vows to the LORD I will pay in the presence of all his people.

Vows that are made in a time of distress are later fulfilled during the tôdâ. The sacredness of the ceremony is underscored by the fact that it takes place within the setting of a liturgical assembly.

The psalmist who once faced the prospect of death now stands in the midst of the assembly, humbled and grateful to God.