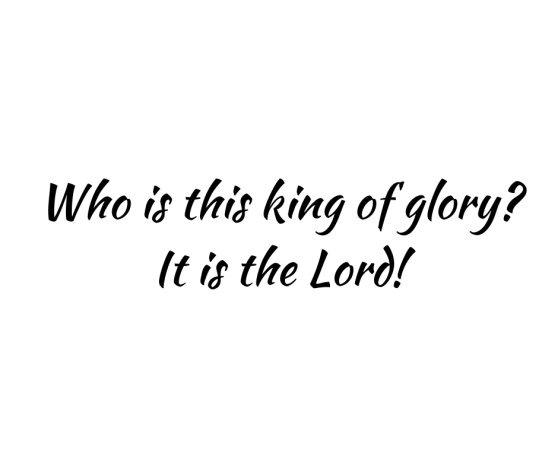 This week’s responsorial comes from Psalm 24, an ancient hymn of praise to welcome God, the king of glory, into his temple.

In the celebration of our feast today, the king of glory comes to his Temple cradled in his mother’s arms.

Lift up, O gates, your lintels; reach up, you ancient portals, that the king of glory may come in!

There are few themes more central to the faith of ancient Israel than that of the kingship of God, a metaphor that comes from a world where royalty held sway. It represents power and majesty, authority and dominion. When applied to a deity, it could refer to the rule exercised over people or the sovereignty wielded over other gods. In monotheistic Israel, God’s kingship functioned in both ways.

The mere human structures of the gates are too low and narrow to allow the King of Glory to pass, so they are poetically asked to raise themselves up.

Who is this king of glory? The LORD, strong and mighty, the LORD, mighty in battle.

Since kings rarely travel without some kind of entourage, it is safe to conclude that the approach of the king described here is a form of a procession. When praying this psalm, a Christian cannot help but think of the triumphant entry of Jesus into Jerusalem (Matthew 11:1-11).

What appears to be a question-answer dialogue reflects a custom practiced in walled cities. Individuals were able to enter these cities through a small door in the much larger gate. This door was usually narrow enough to allow passage in and out of the city to be monitored by guards. However, military or celebratory processions had to go through the gate. Before allowing them entrance, a sentinel would require some form of identification. The sentinel on the city wall would shout out the questions and the people on the ground would shout back the answers.

The titles used here suggest that God has been victorious, and so as the people shout their answer to the sentinel’s question, they are also proclaiming God’s glory.

Lift up, O gates, your lintels; reach up, you ancient portals, that the king of glory may come in!

The regal request for entrance is repeated. Since the portcullis (a gate that moves up and down) was unknown in the ancient world, a literal interpretation of this command is impossible. Instead, it is understood as a full personification of the circle of gate towers: they are like a council of elders, bowed down and anxious, awaiting the return of the army and the great warrior king gone to battle.

Besides being referred to as king, the LORD is also described in military terms. Since hosts (tsâbâ’) are army divisions, the title “LORD of hosts” suggests that God is the commander of military forces. Such a characterization recalls the ancient Near Eastern myth of creation. In it, a young and vibrant warrior god first defeats the cosmic powers of chaos and then reorders the universe. In this psalm, the God of Israel is praised as LORD of hosts and king of glory who is strong and mighty in battle.