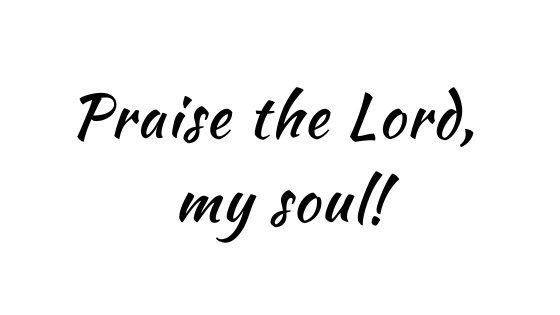 Our responsorial psalm for this week comes from Psalm 146, a hymn of praise that extolls the merciful God as the only source of strength. It is the first of the five hymns that conclude the Psalter.

The Lord keeps faith forever, secures justice for the oppressed, gives food to the hungry.

God shows mercy to those in every kind of need.

There is an allusion here to God’s deliverance of the people from the bondage of Egypt and to God’s providential care of them during their sojourn in the wilderness. God has been faithful. This is reason enough to praise the LORD!

The LORD gives sight to the blind; the LORD raises up those who were bowed down.

God’s graciousness to the vulnerable is next extolled. There are many situations in life that can force one to be bowed down, whether a physical disability, a mental or emotional affliction, an economic or social disadvantage. Whatever it might be, God raises up the needy, enables them to stand with pride, reestablishes them in security.

The LORD loves the just; the LORD protects strangers.

Strangers or aliens lack certain legal rights, and since it is not their own nation, they may not be familiar with the rights they have. Insensitive or unscrupulous people can very easily take advantage of them. These vulnerable strangers are precisely the kinds of people the God of Israel chooses.

Israel itself is the prime example of this: it was when they were aliens in Egypt that God took them and made them God’s own people. This is certainly reason to praise God!

The fatherless and the widow the LORD sustains, but the way of the wicked he thwarts.

In patriarchal societies, only adult free men enjoy certain privileges. As part of the household, women and children are under the jurisdiction and care of such men. Women belong to the households either of their fathers, their brothers, or their sons.

Likewise, it is presumed that the orphans referred to have no extended family within whose jurisdiction they might take refuge. These are the ones for whom God cares.

This verse creates a poignant connection with our other readings for this Sunday, which highlight the stories of two different widows in extreme poverty.

The LORD shall reign forever; your God, O Zion, through all generations.

The final verse praises God as sovereign and eternal ruler in Jerusalem. This is not a God who is far off; all the other verses of the psalm testify to the glory of this God who reigns forever from the very hill (Zion) that is at the center of the lives of the people. This God has entered into their history and into the very social fabric of their existence. Such a God deserves praise!

Alleluia, or Hallelujah in Hebrew, is a liturgical expression meaning “praise ye Yah” (“praise the Lord.”) This summons suggests that this psalm was sung as a hymn in a liturgical setting. In this case, it’s also used as a response to their series of statements that have been about the nature of God. Having heard examples of God’s indescribable graciousness, the people are called to give praise. Alleluia!