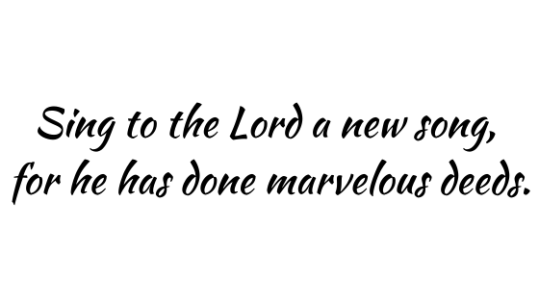 The responsorial psalm for today’s feast comes from Psalm 98, an enthronement psalm that praises God as king over all.

Sing to the LORD a new song, for he has done wondrous deeds;

The psalm opens with a summons to sing a new song to God. The marvelous deeds of God being praised had never been done before, therefore the people required a song of praise very different from what they had previously sung.

“Listen to me: Sing a new song to the Lord. You tell me that you are already singing. Sing on, I say, sing on; I can hear you. But try to make sure that your life does not contradict the words that your tongue sings. Sing with your voice and with your heart, sing with your mouth and with your deeds … The praise of the song comes from the singer himself. If you wish to give praise to God, become the song that you would sing. You yourselves will give him praise if you lead holy lives” [Saint Augustine, Sermones, 34, 3-6].

his right hand has won victory for him, his holy arm.

God is depicted as a triumphant warrior whose right hand and outstretched arm have brought victory.

The victory sketched in these verses seems to have been historical, one that transpired on the stage of Israel’s political experience.

The LORD has made his salvation known: in the sight of the nations he has revealed his justice.

The focus here is on the particularity of Israel’s salvation by God.

The fact that this salvific justice was revealed not only to Israel but also to Israel’s pagan neighbors suggests that either the righteous character of God’s rule or its universal scope had been challenged.

He has remembered his kindness and his faithfulness toward the house of Israel.

The psalmist claims that it was God’s remembrance of his covenantal lovingkindness (hesed) and faithfulness (ěmûnâh) promised to Israel’s ancestors that prompted this triumph.

These same divine actions are celebrated in the canticle spoken by Mary, the Magnificat; they reach their climax in the sending of the Messiah, the Son of God, whereby God reveals his justice to all the nations. Hench, we use this psalm in today’s liturgy to celebrate the Immaculate Conception of Mary, God’s “masterpiece.”

All the ends of the earth have seen the salvation by our God.

The final verses elaborate on the universal scope of the praise that is given to God. The victory God has won is clear and complete, visible to all.

Sing joyfully to the LORD, all you lands; break into song; sing praise.

All the nations, therefore, all the earth, are called to acclaim God.

God’s glorious triumph prompts the psalmist to repeatedly call upon the people by all ways and means possible to express joy give God praise for what he has done.