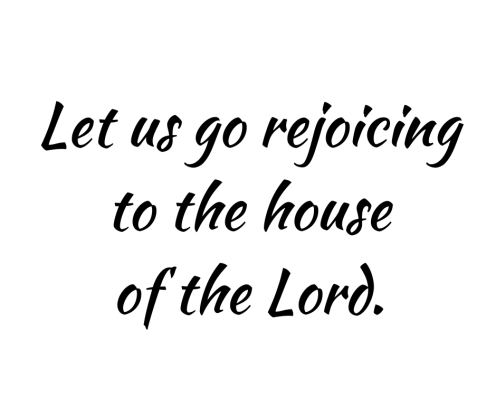 The responsorial psalm for this week comes from Psalm 122, a hymn of joy and praise for the opportunity to go to the Temple in Jerusalem.

I rejoiced because they said to me, “We will go up to the house of the LORD.” And now we have set foot within your gates, O Jerusalem.

Glorious temples were not only evidence of the wealth and importance of the rulers who commissioned them, they were concerned with the dwelling place of God on earth.

For this reason, an opportunity to go to Jerusalem and enter the courts of the Temple was considered a great honor and a religious experience.

Jerusalem, built as a city with compact unity.

The city of Jerusalem was itself something to behold. It was built on Mount Zion, a hill that towered above much of the neighboring terrain. This not only gave it a vantage point from which to survey the surrounding territory, an important asset in the case of possible attack, but its height enabled it to be seen from a distance, creating the impression of watchfulness and protection.

To it the tribes go up, the tribes of the LORD. According to the decree for Israel, to give thanks to the name of the LORD. In it are set up judgment seats, seats for the house of David.

Jerusalem was the seat of royal political power, and it became the religious center of the tribal confederacy that was bound together by a common allegiance to God. In this capacity, it also became the center of the administration of justice.

The monarchy may have exercised significant influence in this area, but it was still accountable to the religious principles and values embedded in the religious tradition.

The strong fortifications of the city and its reputation as the site of the Temple and the place where God dwelt gave Jerusalem the reputation of being invincible. When one went to Jerusalem, one was visiting the center of every facet of Jewish life. This was truly the chosen city.

Pray for the peace of Jerusalem! May those who love you prosper! May peace be within your walls, prosperity in your buildings. Because of my brothers and friends I will say, “Peace be within you!”

The psalmist calls the audience to pray for the peace of the city.

It was customary to offer greetings of peace as one entered a home or addressed a group (Romans 1:7, 1 Corinthians 1:3, Galatians 1:3, etc.). Such a prayer might seem especially pertinent in this instance given that the name Jerusalem means “city of peace.”

The Jewish wish for peace (shālôm) requested here incorporates more than the absence of war or strife. It includes prosperity, well-being, and completeness.

Because of the house of the LORD, our God, I will pray for your good.

This verse forms a kind of inclusio with the opening verse. Although the city has strong fortifications, it is the presence of the house of the LORD (the Temple) that makes it worthy of the peace it enjoys and provides for those within its gates.