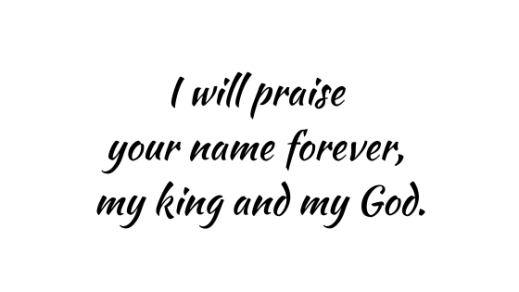 The responsorial psalm for this week is a hymn of praise of the greatness of God. Interestingly, the full psalm is in acrostic form, meaning that every verse begins with a successive letter of the Hebrew alphabet.

The five psalms that precede this one (Psalms 140-144) are all petitionary prayers; this psalm and the five that follow it (the last six psalms in the Book of Psalms) are all hymns of praise.

The opening acclamation is closely associated with God’s revelation of himself to Moses when he re-established the covenant with the people (Exodus 34:6).

The LORD is gracious and merciful, slow to anger and of great kindness.

This correlates with how God described himself at his revelation to Moses in Exodus 34:6.

The LORD is good to all and compassionate toward all his works.

Note that this divine goodness is not reserved for Israel alone but is extended to all God’s works, including all people and all of natural creation. The covenant has been expanded to a universal embrace.

Let all your works give you thanks, O LORD,

and let your faithful ones bless you.

The faithful of the LORD are those who are holy (hāsîd), those who are bound to God in covenant loyalty. They are summoned to bless the LORD, to praise or honor God in reverence and awe.

Let them discourse of the glory of your kingdom

God is characterized as a monarch who rules over a kingdom. The word used here for glory (kābôd) means “heavy” or “weighty,” implying that God’s kingdom is substantial, distinguished because of its magnitude, comprehensive in its splendor.

The idea that gods ruled as kings was quite common in the ancient world, so to characterize the God of Israel in this way was not unusual. What are unique are the exclusive claims made about the reign of Israel’s God. It is resplendent, as one would expect, but it is also universal and eternal.

The God before whom the psalmist stands is also a savior who has performed marvelous deeds on behalf of the people. God has delivered them from bondage, has provided for them in their need, has established them as a people, and has promised them a secure and prosperous future.

The final section of the psalm extols God’s reign and God’s compassion, which is especially evident toward those who are burdened. Not only does he not despise or reject them; there is a sense in which he especially draws near them to hold them up.

In light of all these magnificent qualities of God, it is not enough to enjoy the privilege of belonging to God’s kingdom. In addition to praising God for the wonders he has accomplished in and for the covenanted faithful, they are to announce the glory of God’s rule to the entire human race, to all the children of Adam.