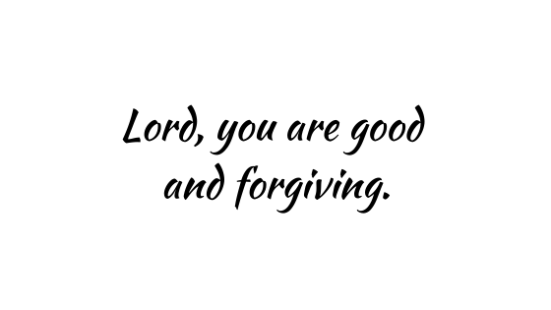 Parts of an individual lament are singled out for this week’s responsorial psalm: a prayer to be heard by God, expressions of praise, and a plea for mercy. This psalm is entitled “a prayer of David;” it was probably not written on any specific occasion, but was a prayer he often used himself and recommended to others for their use, especially in a day of affliction.

You, O LORD, are good and forgiving,
abounding in kindness to all who call upon you.
Hearken, O LORD, to my prayer and attend to the sound of my pleading.

In this first section, God is first extolled with confidence, then a fervent plea is made. The psalmist calls God “good and forgiving,” most likely because of the way he has experienced God in the past. If God acquitted him of previous wrongdoings, surely God will look with pardon again.

God is also described as abounding in lovingkindness (hesed), the kind of steadfast love associated with the covenant.

Note the parallel construction of the entreaty, which intensifies it:

Hearken….. to my prayer
Attend….. to the sound of my pleading

All the nations you have made shall come and worship you, O LORD, and glorify your name.

The supplication gives way to a paean of praise. The excellence of the God of Israel is extolled. He is the creator of all and for this reason receives the worship (or homage, shāhah) of all the nations.

For you are great, and you do wondrous deeds;

It’s not clear to which of God’s wondrous deeds the psalmist refers. The Hebrew word used (pālā’), suggests achievements considered impossible to accomplish, such as cosmic feats or historical exploits. Or perhaps given the recent mention of God as creator, the allusion could be to the wonders of creation.

you alone are God.

The psalmist also declares that there is no other god; consequently, the LORD has no rivals.

You, O LORD, are a God merciful and gracious, slow to anger, abounding in kindness and fidelity. Turn toward me, and have pity on me; give your strength to your servant.

The structure of this third section echoes the first: extollment followed by supplication.

Here God is described with the same confessional faith as is found in the account of Moses’ encounter at Sinai: compassionate (rahûm) and gracious (hannûn), slow to anger and filled with lovingkindness (hesed). This comes directly from Exodus 34:6, when the people had sinned by worshiping the golden calf — but God willingly reestablished the covenant with them. In quoting this passage, the psalmist both acknowledges personal guilt and appeals to divine steadfastness.

In asking God “to turn toward” him, the author is asking for the blessings that flow from facing God. Chief among those blessings is mercy (hannûn), a covenant trait. In designating himself as a servant (‘ebed) of God, he reinforces covenant language yet again, confident that God will be faithful to his promises.

The nations may bow down before the God of Israel, who alone is the Creator, but the psalmist pays homage because, despite his own sinfulness, he relies on the steadfastness with which the God of compassion and grace clings to the covenant.