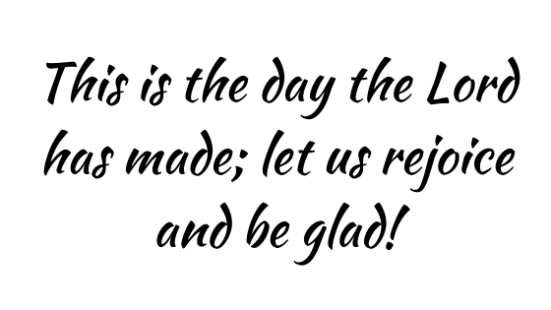 The responsorial psalm for Easter Sunday is from Psalm 118, a song in praise of God’s power and victory. With this psalm, we proclaim and celebrate the new order of salvation that has been established by the resurrection of Christ.

The communal character of these sentiments, seen in the reference to the house of Israel, suggests that the people have been saved from some kind of national enemy. God’s goodness and mercy toward the house of Israel are made manifest in this victory.

The Hebrew word for mercy (hesed) is a technical theological term denoting God’s steadfast love for God’s covenant partners, the chosen people of Israel. The psalmist maintains that such love will last forever. This is indeed reason to give thanks!

God is depicted as a mighty warrior whose strong hand prevails over forces that threaten the security of the people and the very life of the psalmist.

The right side of a person was considered the stronger side, the honorable side. The image of God’s right hand connotes strength and triumph. It suggests that God’s victory was won in a righteous manner.

I shall not die, but live, and declare the works of the LORD.”

There seems to be a personal element in this victory. In the wake of God’s triumph, the psalmist himself has been spared from death. As a result, he extols God’s good favor, becoming a witness to the grandeur of the saving works of the LORD.

The stone which the builders rejected has become the cornerstone.

The final image is the metaphor of reversal of fortunes, found so often in religious literature. The situation is always the same: A righteous person is rejected, sometimes even persecuted, by other members of the community. When God steps in to correct this unjust situation, the righteous one is not only vindicated but is also elevated to a position of great importance.

In this psalm, the stone that was rejected becomes the very foundation of the entire building. It’s not clear to whom this metaphor of the cornerstone refers. However, as the verses of this psalm are arranged for our liturgical use, it seems that the speaker who survived the threat of death is the referent. This salvation was brought about by God, and it is recognized as a marvel for which to give praise and thanks.

The New Testament interprets this verse as referring to the death and resurrection of Christ (Matthew 21:42; Acts 4:11). Jesus was rejected by the Jewish authorities but ultimately became the cornerstone of God’s saving power, so that “there is no other name under heaven given among men by which we must be saved” (Acts 4:12).

By the LORD has this been done; it is wonderful in our eyes.

Throughout this account of suffering and salvation, it’s very clear that deliverance and exaltation are the works of God and not the accomplishments of human beings. This saving act may have happened to an individual, but the entire congregation has witnessed it and marvels at it.

The redemption at the hand of the LORD leaves us in awe.